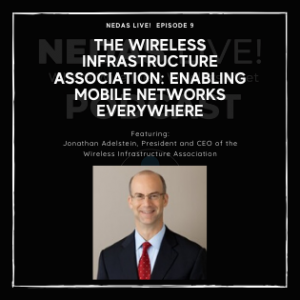 On Episode 9 of The NEDAS Live! Podcast, Ilissa Miller, President of NEDAS, CEO of iMiller Public Relations and co-founder of the IND-DCA; and Steve Yapsuga, Co-Chair of the NEDAS Advisory Council and North American Director of Sales for Comba Telecom, sat down to chat with Jonathan Adelstein. Jonathan is the President & CEO of the Wireless Infrastructure Association (WIA), a group that represents nearly 200 companies devoted to building wireless broadband facilities that connect every corner of America. Jonathan has also served as FCC Commissioner and as a U.S. Senate legislative aide.

As a jumping off point for this episode’s discussion, Steve asks Jonathan to take the listeners back to his days with the Senate and as Commissioner in the early 2000’s. In terms of the ease in making communications progress, Jonathan begins by stating that things are a lot more polarized in Washington D.C. than they were 20 years ago. While communications is more of a bipartisan issue than others, it still is affected by changes in politics. Jonathan states, “On the hill, it’s really hard to get anything passed…but Congress is still getting things done.” For instance, he references the Mobile Now act, which provides a lot of opportunity for broadband investment. He also notes that budgetary demands are a large catalyst for legislation nowadays.

Jonathan has noted in the past that his goal was to bring connectivity to everyone in the United States. Since making that statement back in 2014, Jonathan says that there has been a lot of progress when it comes to increasing wireless connectivity. There are still some challenges, he admits, and mapping still has some ground to cover — so you never really know where connectivity is or isn’t. Sometimes the charts will say that connectivity is there, but when individuals drive around in those areas, there are gaps in coverage. Holes exist in rural coverage, and available capacity is being stretched in dense urban markets.

So, why are these challenges persisting? Jonathan chalks it up to the massive amounts of data that consumers are using. Year over year, users are making huge leaps in the volume of data that they’re consuming, whether that be from video, other content or applications. The industry is always straining to keep up. Jonathan brings up a recent study, which reported that data increases per device in the last nine years have gone up substantially, but revenue per device has dropped by 12 percent. So, consumers are getting more for less, but carriers are under pressure.

Now, a lot of the value creation is happening with Facebook, Google, Netflix and Amazon — the companies that are using the network but not really paying for it or investing in it like carriers are. So, the struggle today is finding a way to ensure that there is enough capital to go around.

Overall, the U.S. has made leaps and bounds in its wireless capabilities, ensuring that many today have digital means to make their lives easier. However, problem solving is still just as important — if not more important — than ever. This is exactly why NEDAS, an association located at the intersection of wireline and wireless, promotes education and collaboration through programs, webinars and regional conferences in key areas such as Washington D.C., Boston and New York City. The association is dedicated to empowering decision makers and facilitating discussion that can truly create a better-connected future. Once industry players are empowered to come together and create ecosystem-wide solutions, the future of communications and connectivity becomes even more exciting.

To learn more about the NEDAS Live! Podcast or submit yourself for consideration to appear on an episode, please click here.

CONTACT
© 2022 NEDAS
ExteNet Systems Partners with RTO Wireless to Bridge the Rural Digital DivideNews
Publicist Rockstars: “Being the best at something can be a key differentiator in the business world” with Ilissa Miller of iMPRNews