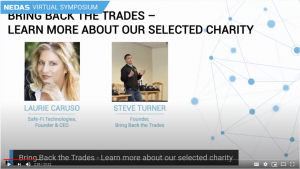 The NEDAS Virtual Symposium aired live September 8-10, 2020 continued the organization’s commitment to giving back.  The charity selected by NEDAS, with all registration fees being donated, is Bring Back the Trades. In a virtual presentation lead by the NEDAS Charity Committee’s chair, Laurie Caruso, the Founder and CEO of Safe-Fi Technologies she brings to the screen Steven Turner, Founder of Bring Back the Trades.  Turner’s organization, Bring Back the Trades, is a scholarship program specifically driven to raise awareness of the lack of younger generations and youth engaging in trades as a career. That is such a great initiative in an area that has mainly been practiced by older and aging individuals who are on the verge of retiring.  Despite the variety of opportunities for careers in trades, there is a lack of concern to accommodating youth to take over these vitally important roles in society. Examples of inhibiting factors preventing young people from joining trade vocations include education and certification requirements. The scholarship program offered through Bring Back the Trades is vital in changing the narrative to overcome such barriers.

Bring Back the Trades has several success stories about individuals who have benefited from the $1000 scholarship fund. Applicants are required to submit an essay on why they deserve the prize. This provides a roadmap for youths to get into trades and eventually to embark on a job and career doing what they love.  An example of an aging population among workers in trades is in New Hampshire, where trades such as plumbing, welding, and electrical services are challenged. The average age for these trade workers is between 55 and 65 years. This emphasizes the need to have today’s younger generation engaging in the trades and the long-term careers they provide.

Today, there appears to be inertia improving the conditions for jobs in the trades, including advancements in technology, especially the use of computers. This makes these trades more appealing to a younger workforce and hence the need for certifications to make them more professional. However, despite the opportunities, Bring Back the Trades is facing a challenge for attracting more youth to apply for the scholarship award. For any youth looking to join the industry, grab your chance and write your essay to Bring Back the Trades and convince them why you deserve the scholarship.  To learn more you can watch the panel in its entirety on the NEDAS YouTube channel here.

NEDAS sits at the intersection of the wireline and wireless infrastructure where interconnectivity is key to enabling the connected world.  The group serves as facilitators of the connected world through the promotion and creation of networking opportunities and innovative thought-leadership programs at the crossroads of wireless and wireline communications infrastructure space. Since 2010, NEDAS programs bring together industry thought leaders, cutting-edge technologies and end-user solutions shaping a new communications infrastructure landscape enabling a more connected world. The NEDAS Virtual Symposium is available online by visiting virtual.nedas.com.